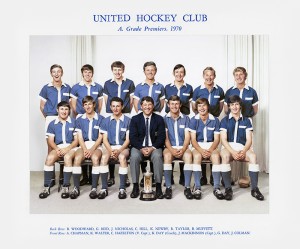 Saturday the 19th September is the 50th Anniversary of United Hockey Club’s
first Men’s 1st Grade Premiership win in 1970. A big weekend’s celebration
was to have taken place back in May of this year when 10 of the winning team
were to meet up in Canberra for a reunion. There was a group of 14 in that
team however, three, ( Graham Day, Colin Hazelton and Kevin Day, the coach )
have passed away in the interim and we have been unable to track down
another, John Colman. Unfortunately this planned reunion was another
casualty of the current pandemic.

The remaining ten players of that 1970 team are John Nicholas, Alan Chapman,
Bob Taylor, Graham Reid, Colin Hill, John MacKinnon, Barrie Woodward, Bruce
Muffett, Kim Newby and Ken Walter. The first six named still live in
Canberra and as such will now come together on the actual anniversary date
for a scaled down celebration of that day in 1970. No doubt there will be
many old memories to be re lived, and embellished, and 1970’s replica shirts
will be presented.

The group will be getting together in Pick Up Stix at The Hockey Centre to
watch our Men’s and Women’s CL1 teams play with hopefully a chance to catch
up with the current players after the games. United had a very successful
period through the 1970’s winning 1st Grade Men’s Premierships in 1970, 73,
76 and 79. It is the intention to have a reunion in each of the relevant
years to celebrate all of these 50th anniversaries as they come around.

For the record, in the 1970 Grand Final played at Narrabundah Oval, United 4
( Newby 2, Reid, Taylor ), defeated Barton 1 (Rawlings ). The umpires were
Keith Harding and Brian Bowen.